This was now two weeks ago I think, but I'm digging through old stuff right now.  Lou is still blind (in both eyes) and it's pretty much consuming.  I took a video of him scooting around on the floor trying to move around the house on his own. I may post it tomorrow.  He's pretty much pitiful most of the time.  He did eat some french fries for lunch and an orange for dinner.  At least he won't starve.  We take him back to the eye dr today to check for healing.  We are praying for lots and lots of healing.

Anyway, here are some snowman activities from preschool and the nature center last week or so.

The kids painted their feet on blue paper and then the faces and arms were added.  Older kids could add a hat and scarf and whatever else seems right.  I always want to put a pipe in their mouth, but that's not OK anymore. 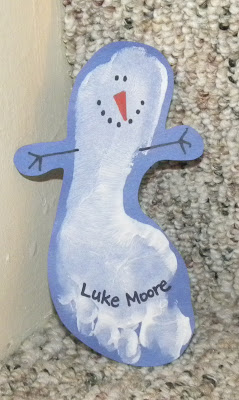 Here's a game we played during circle time.  Many of the kids still need to work on recognizing numbers 1- 10.  For this game, I focused on 0-5. 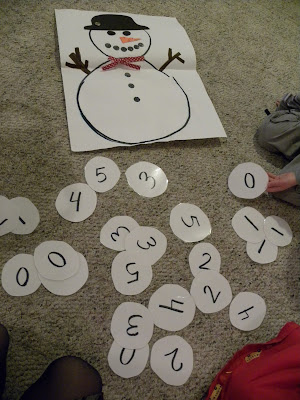 His belly is a pocket.  I asked each child to find a certain number and come up and put it in his belly. 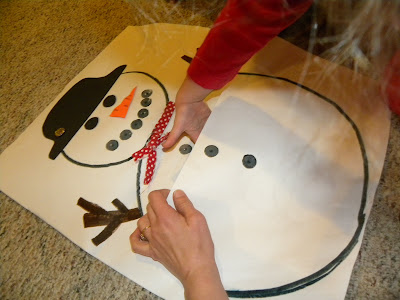 This picture is missing the plastic link chains, I left those at school for another activity. After snack time, I set out these snowballs.  They needed their assigned number of links added  in the punched hole.  I also set out the snowball sensory tub. 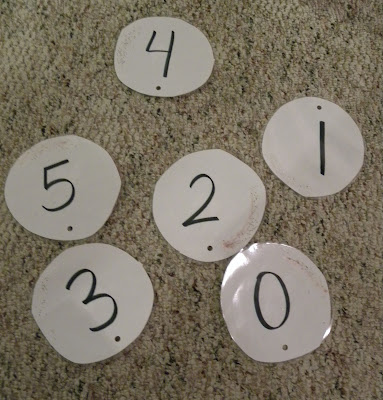 This build a snowman activity was like a wreath one we did at Christmas.  I worked a few of the kinks out though.  I used a dice with the written numbers instead of dots, had a blank snowman body to start with rather than have the body be one of the numbers, etc. 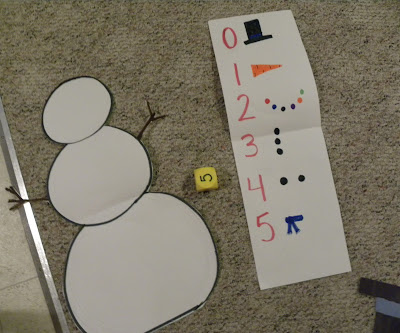 While I showed them all the pieces, I sang this little song.  Look how lazy; I took a picture instead of writing it out! 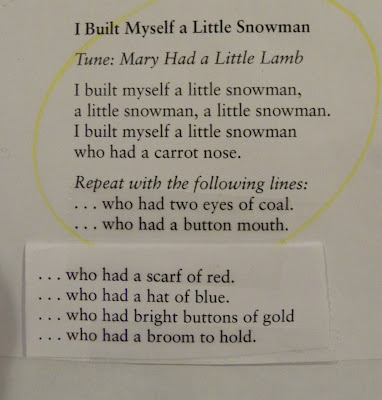 The dice gets rolled and the snowman gets built. 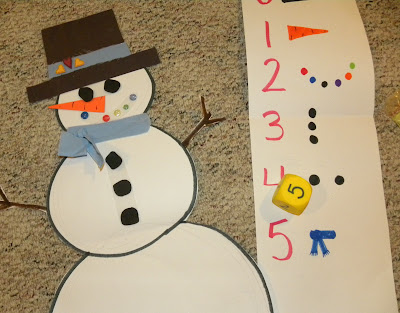 I stuck the eyes, 3 buttons on the front and the mouth buttons together on a sheet of blank scrap lamination. It worked out well keeping them together and we could quickly and easily place them  on the snowman. 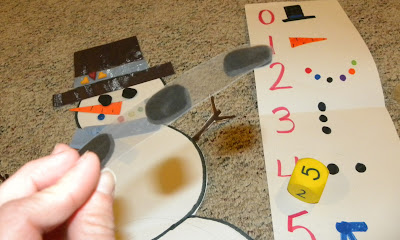 I love a good counting rhyme.  This one goes like this:
5 little snowpals standing in a row,
each had a hat and a big red bow.
Out came the sun and it shone all day,
and one little snowpal melted away.
repeat with 4, 3,2,1 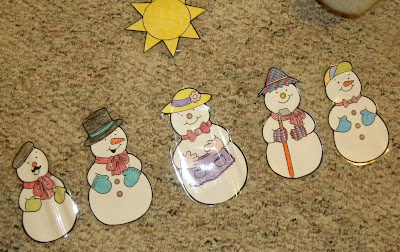 I read one of my favorite snowmen books, Snowballs by Lois Ehlert.  It has great pictures! If we had more time, we could have sorted through bags of 'good stuff'(like from the story) and put together faces out of all the goodies.

Linking up to some of these fine blog parties.
Posted by Beth- the mama bee at 2:58 AM

I am praying for healing, comfort and rest for the family.

Cute snowmen projects! Please update us after you see the dr. today. Praying for Luke's quick healing. Let us know if we can help out in any way.

This post has so many wonderful ideas and has inspired me in my Tot School planning this month. I've featured you here:

I hope you'll stop by and grab a featured button. Have a great day!

One Snowman more fun than the next!! Love them all. Esp the footprint one!!

Thank you for linking up to Kids Get Crafty. So good to have to you visit!