I'm super excited to tell you about a really engaging activity we did in my classroom.  It started with my trip to the escape room in town and just how much I loved it.  Then I made my own kids an Easter hunt 'escape' style.  I was thinking there had to be a cool way to bring it into the classroom.  There's at least one company out there making ready made 'escapes' on different topics.  I tried one of theirs and then decided I could make my own that would suit our needs even better, I'll tell you about them at the end of this post.   Admittedly there was a good deal of time invested in the creation and then in the set-up, but the rigor, engagement, and fun levels were all so high, it was absolutely worth it.  High rigor, high fun, high engagement are a sought after trifecta in the classroom.  I have used that word twice in a week here.  Score. 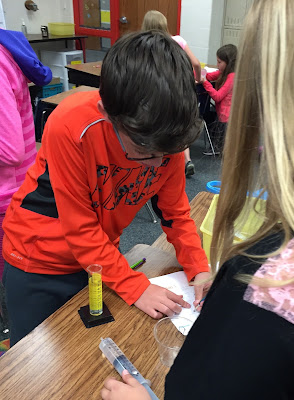 The topic for this escape was as a cumulating review for the measurement science unit I teach.  I teach it four times in the year to each of the four third grades, so I was thinking time investment wise,  a science activity would get the most play in my classroom.  Bang for my buck. 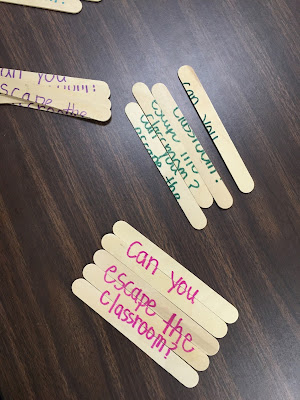 To put the kids into their groups, I passed each student a popsicle stick. Because this is not my first rodeo, I had pulled one stick of each color in my hand and handed it to a student I felt like could be a leader for that group.  I also had one stick of each color in the back of the pile in my other hand and handed it to students who needed spread out.  If you're a teacher, five kids immediately came to mind.

The first challenge was to get into the color group you were handed and build the puzzle.  Once the puzzle was built they waved me over and I gave them the first challenge card and sent them after their supplies.  Each group needed one cup of water, one syringe of water... 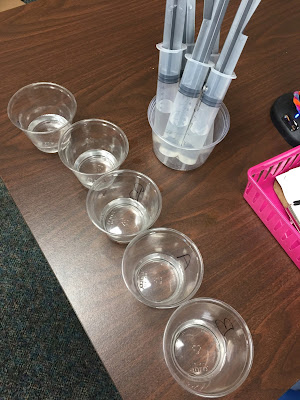 and one bucket of supplies. We do four types of measurement in my science unit, length in cm, capacity in ml, weight in g, and temperature in C.  I wrote cards for the first three and have the option to add a temperature card at a later date.  I didn't want the pressure of having temperature sensitive setup elements.  I also was concerned about time. 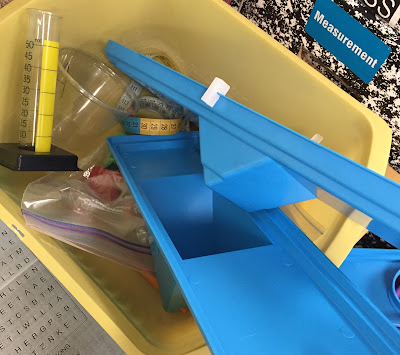 Card one had three questions.  The number choice next to the answer they selected were the numbers for the first lock, a three digit lock.  For example, question A's answer was 2.  20ml.  The first number in the combination was 2.  Should they have answered it correctly on their first guess, they were able to open the lock.  Every group but one ended up back at their desks trying to figure out where they went wrong. 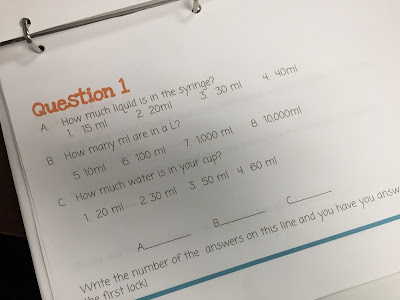 The question about measuring the water in their syringe was tricky for some because I filled them with 20 ml water and 30 ml air.  Few groups remembered that they needed to get rid of the air.  I did not expect that to be a tricky element. 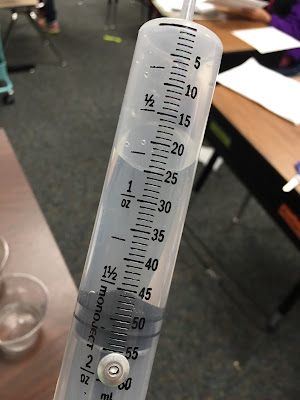 The first lock was on an old wooden art kit that I added a flip style locking piece to. 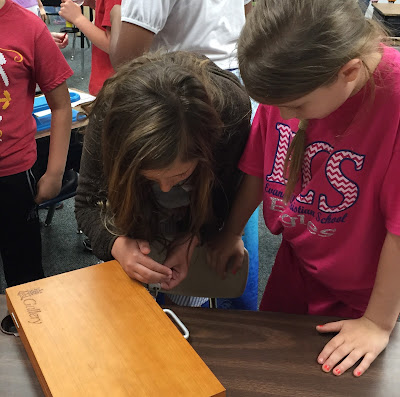 Inside was card two.  There was one card in each location for each group.  The groups had to relock the remaining cards back up for the next group.  I found that I was needed to circulate around and help with locks and the relocking was a bit tricky. 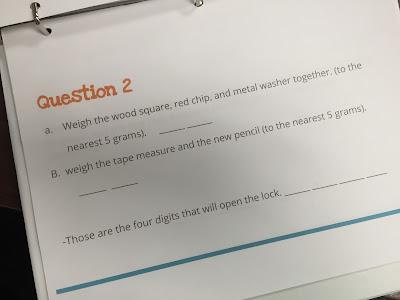 Card two required them to set up and balance the scales and then do a little weighing.  All the pieces needed were in their buckets. 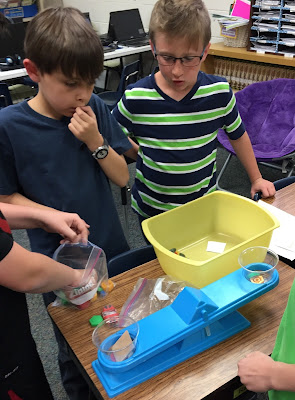 A few groups had to go back and reweigh their items.  I gave very little help and allowed them to make mistakes and have to go back and start again.  It was interesting who in each group was the real problem solver, who was too bossy to listen to their team mates, who went for the fast and easy answer and then wasn't right and who was slow and patient and careful  in their work. 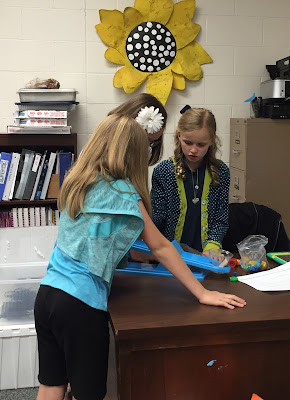 Card two gave them a four digit number that was the combination to a four digit lock that I had placed on one of our lockers. 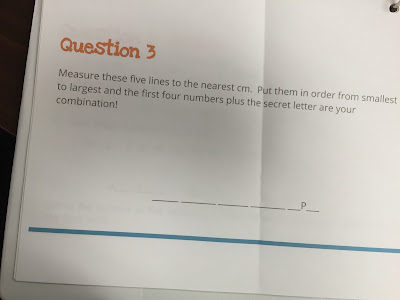 Inside that locker was card three. 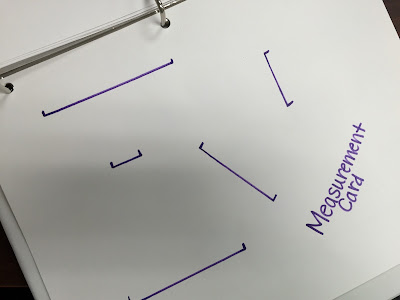 Card three required some measurement in centimeters.  And careful reading of the directions!  The lock was a five digit lock that was actually 4 digits and a numeral at the end.  I had to made some last minute adjustments to the card to make the work. 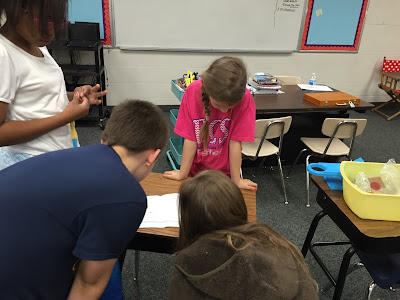 That five digit combination opened the last locker where I had placed the awards.  There was a pile of first place awards that the first group took, second place awards that the next group took, etc.  I was able to do this activity with my final quarter science class and then with my homeroom the next week as well and both times the winning group was not the group I had guessed would win.  Slow and steady wins the race. 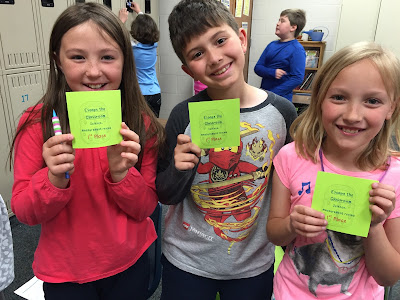 One helpful hint should you choose to create your own is that  I added a card for myself that had the lock information,  and the supplies listed clearly organized.  When I se this up next year I know exactly what to program the locks to and what materials to set out. 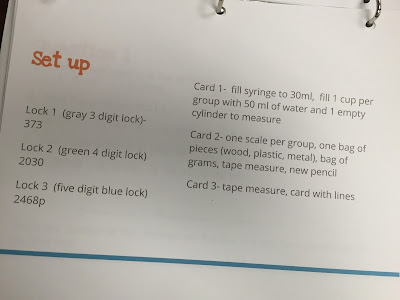 I've been messing around with locks for a few different things in class and have quickly learned that the cheap ones I ordered on amazon to start with were just that.  They broke the first activity.  They were a non-descript black lock with three digits, 2 for like $7.  I ended up slowly collecting locks from target and really like this programable Masterlock style that is $7-8.  I've picked up all different colors to help me distinguish the locks on my set-up sheet. 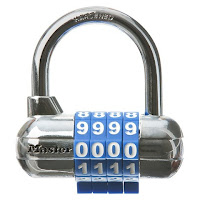 Also, the kids found it helpful to have a little tutorial using the locks before we started.  Most had zero experience with using a lock.

I've also decided that as I create different activities using the locks I need to make sure to always set them back to 0000 when storing them.  Otherwise, I might not remember what card they went with last and end up having to trash them.

I mentioned that I would tell you about the company I tried out that makes escape workshops.  They are called The Escape Classroom.  They are pretty new and don't have a lot of workshops out yet but they do take requests.  I will say that I tried their perimeter and area freebie and it was good. It was geared for 4-6 grade I think and I used it with my 3rd graders.  It was challenging, but doable.  I let them use calculators because we hadn't learned multiple digit multiplication yet. It took them 2 hours, but they loved every second.  I had some feedback for the company and they were great to work with.  They replied super fast and took my comments to heart and made some changes.  They sell their workshops for $15 each, which is a little steep for my teacher's checkbook.  If my school would pay, that might be something to look into.
Posted by mama bee designs at 5:53 PM