Here are some last minute Christmas goodies from preschool this Christmas.  I guess they'll have to save for next year. 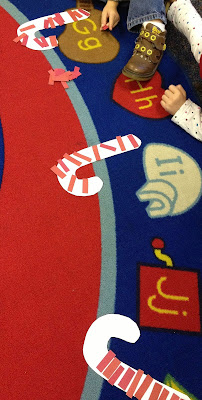 Candy cane math.  This is one from my co-teacher.  She gave the kids each a white paper candy cane and access to bunches of red stripes.  She led them through math equations, helping them solve both addition and subtraction.    "Add four red stripes, good, now add two more...  how many stripes are there now?" 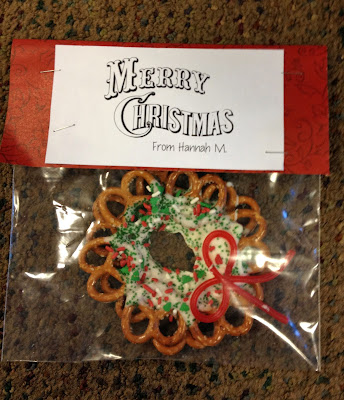 Here are the pretzle wreath treats that Bee passed out to her classmates.  There are just 13 of them in her class, it wasn't a big commitment.  We used this recipe from a few years ago.  2009 actually.  No wonder Bee and Lou didn't remember them.  That's not technically preschool. 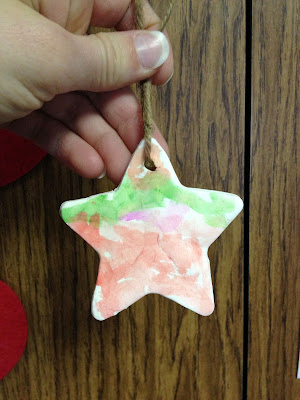 The preschool kids made these lovely ornaments this season.  We used this recipe that we made last year.   I made up the dough and sealed it in ziplocks.  One doubled recipe made enough for 18 prek kids and 15 3-year old and few extra for my kids.  Each child made one ornament.  I baked them at home and the kids painted them with regular watercolor paint the next day.  To help prevent cracking, which I had so much of last year, I baked them at a really low temp for longer, my oven goes down to 170 degrees.  You need to dry them really, not bake them. 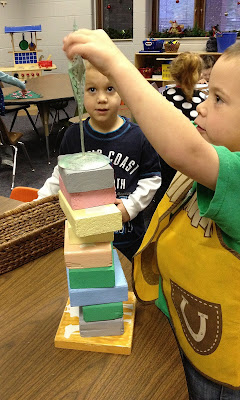 I shared these Nativity pieces/blocks recently.  They were a nice addition to our morning table activities. 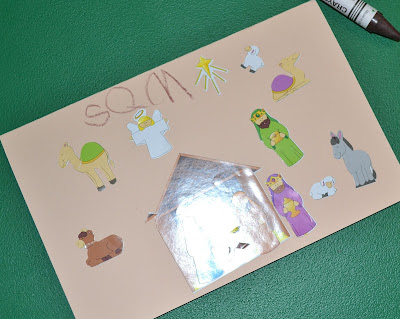 I think these stickers are from Oriental Trading.  We've used them at preschool the past few years to have an easy no mess craft on party day.   The kids used them to make cards. 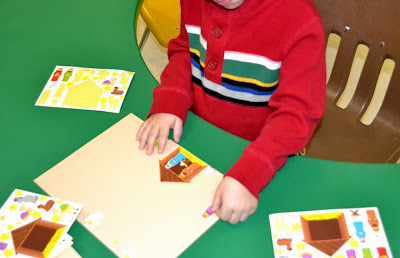 We did have a little bit messy craft for party day, it was saved from a different day and it just worked out to do it during our party. 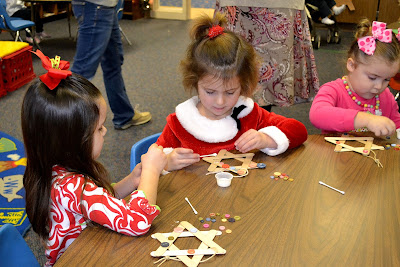 The stars are tongue depressors.  The stars were already glued together and the kids just glued buttons to the front.  The white glue the kiddos used was the only mess. 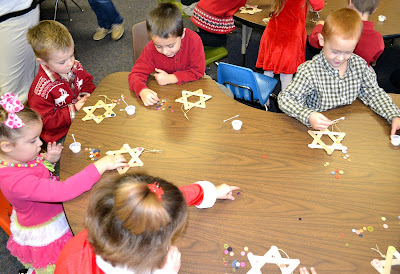 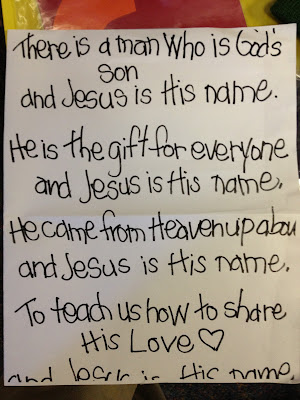 Here's another game we played.  The kids were handed cards with these letters, all the letters we've worked on until now.  There is a paper candy cane/J behind the cards.  There are lines drawn on it to show where the cards go, but there are no letters.  The kids had to pay attention and follow along with getting the cards up and in order. They are getting good at recognizing the letters.  Mostly. 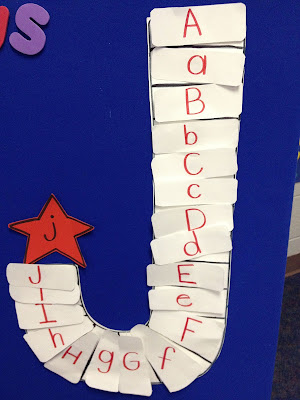 Here's a craft from early in the week.  The kids put their brown handprint on the page and added the pre-assembled baby Jesus in the manger.  We (or someone, not me) turned the handprint into a camel when it was dry.   I like the words around the edge, "I am the camel who followed the star with three wise kings from a land afar." 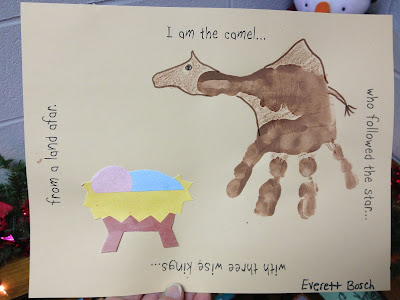 On party day, we played this bingo game, which really isn't bingo, but it tells the Christmas story in order.  The clipart is from Prepared Not Scared.  I made up the bingo cards (all the same) using a table in word doc. and made a larger set for me to show the kids and I told the story. I liked it because it offered another way for me to tell the Christmas story.  Again. 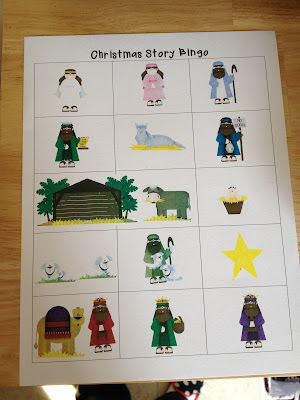 We also played a bow toss game with a sheet as a parachute. I apparently have no photo of this, but we just had about 40 regular present bows on a bed sheet.

We read through the kids' Christmas story books .  The parents watched as the kids flipped through each page (and glitter and sequins flew everywhere).  These were sent home as well.  I wanted the kids to be able to have a chance to 'read' the book to family and friends at home. 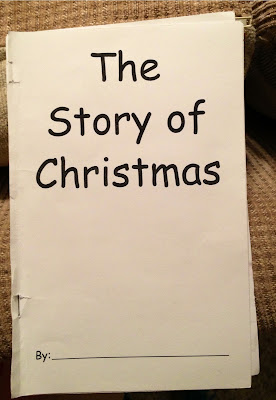 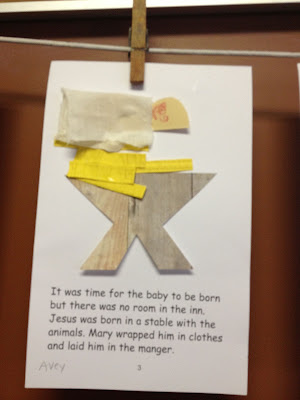 and then went to play some games in the hallway. 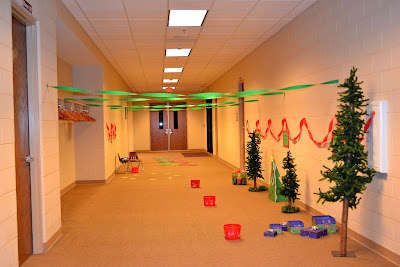 First, we played a game where two kids at a time shoveled ping pong balls and carried them on their snow shovels to another bucket. 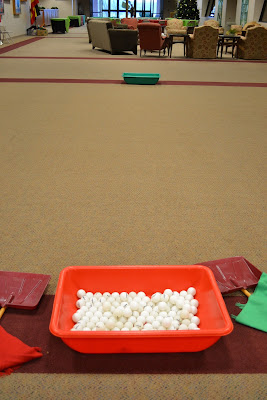 The kids wore scarves while they did it.  Snow is cold.  Two players went at once. 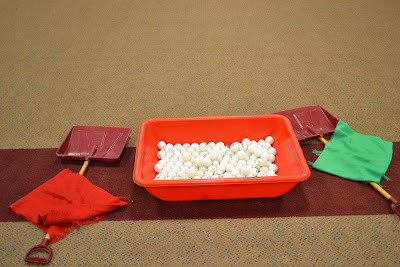 There was a 'bow in the box' toss. 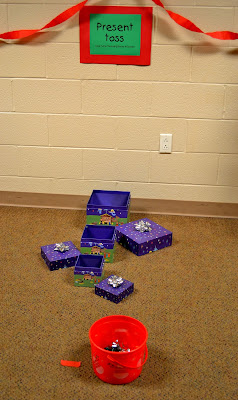 Something was tossed at this little foam core tree.  It's been like a week and already I can't remember.  I used to have a really great memory. 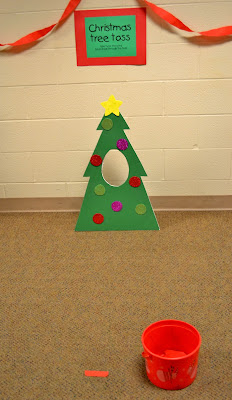 Wooden balls were 'bowled" at these fancied up 2 liter bottles. 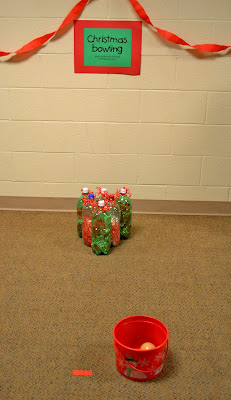 The stars were walked on in a 'cake walk' fashion. 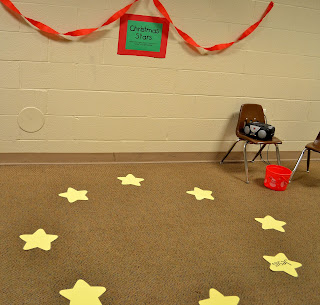 Here's what our tables looked like.  They always look so sweet on party days.

Here was our gift to the kids.  The whole school is the same, the teachers don't have to worry about that at all, which is nice. 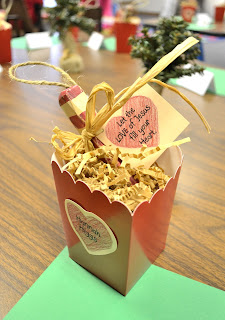 They are sweet little J for Jesus candy cane ornaments. 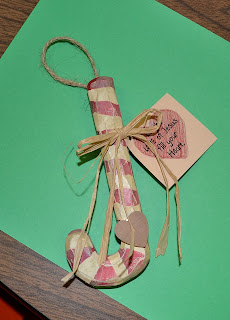 I hope that is all the Christmas preschool related things I wanted to get posted. I still have many photos to go through.  I am showing my kids the James and the Giant Peach movie, so I have an hour and a half to get as much done as I can! Ready, set, go.
Posted by Beth- the mama bee at 2:03 PM