Yep, I'm talking about Valentines Day.  We had a lovely warm weekend (umm... April weekend), and I feel so far behind with the backlog of items to blog.  It's all because of the computer crash in February.
So we're looking at Bee's second grade Valentines Day party.  I got to help work it with another fun mom I've known for the whole time we've lived here.  We went with a 'minute to win it' theme.  The kids had a great time.  The party moved quickly and everyone was thoroughly entertained. 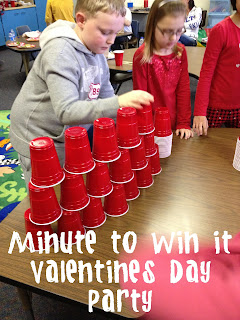 We did several games. One was the cup stack.  Apparently this friend had practiced.  We divided the kids into 4 teams so that everyone had lots of turns. He couldn't wait to be the representative for his team in the cup stacking event.  The kids had to stack 36 cups in a pyramid.  They had of course, 1 minute to do this.  He got close, but no one got it. 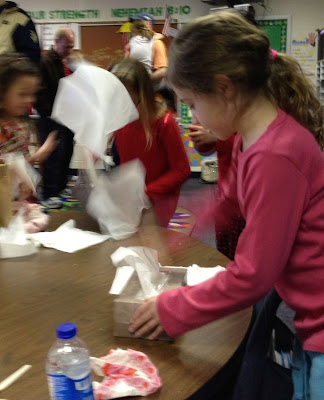 Here's Bee in the next event.  The four teams were each given a full tissue box.  One group member held it still and another pulled the tissues out one at a time. 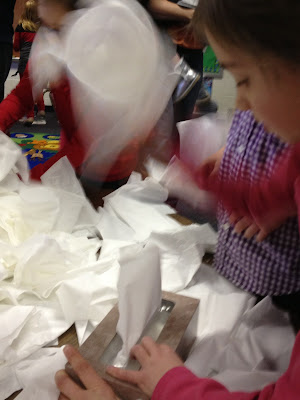 She won this for her group, although I think another group made it too and we gave them both points.

This one was the funniest.  Empty Kleenex boxes had been attached to belts.  The boxes had about 20 ping pong balls inside.  The kids put on the belts and then with one minute, tried to shake all the balls out.  Funny stuff.  I think all groups made it and all got a point.  But we laughed so hard! 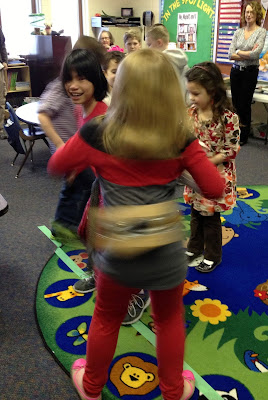 We did a marshmallow toss. Just a simple, one player tossed marshmallows in a little container.  I think we had a number set to earn the point, but ended up just giving it to the team with the most.  It was a little harder than we though.  We used heart shaped marshmallows of course. 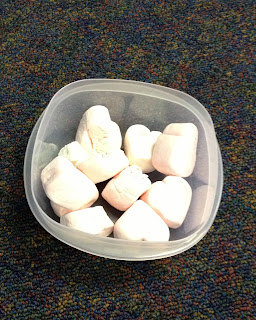 This was fun too.  One kid from each team put a tongue depressor in his mouth and then added conversation hearts in a stack to the edge of the stick.  Talk about cross eyed!  I think we said to get five for the point, but four was the most any player stacked. 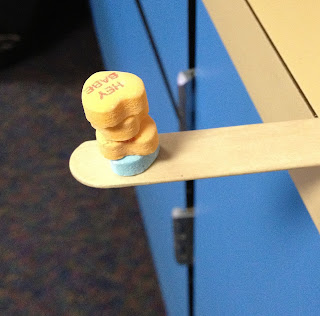 The best part of this one was that I used the old old candies from my preschool game stash for the game. In fact, I had to throw the white ones out because they turned a musty green color.  We told the kids up front that they were old, played with, germ covered and not to be eaten.  No problem.  One of the moms walked in late and apparently missed that message.  The candies were still laying on the table and she was munching away on them!  I ran over and said that the candies were so gross and not to eat them, and she said, "Oh no, I think conversation hearts are so good!"  Then took another handful.  I quickly explained what I meant by gross... preschool game pieces... little hands gross.  She didn't seem too freaked out, but didn't eat anymore.  We all had a good giggle. 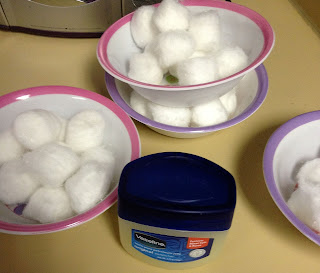 We didn't get to this game.  It would have been a funny one too.  One kid from each team was to put a little dollop of Vaseline on their nose and then try to transfer as many cotton balls as they could from one bowl to another in the minute.  We'll save it for next year.

We also worked on this craft.  We had it set up at three different tables and they worked on each part at a different station. I handed each child a sturdy plastic plate with their name.  This way they could work in any order and just carry their pieces around to the different stations.  One table was decorating the pots.  The kids used white glue to attach tissue paper to the sides of a terra cotta pot.  Another table was adding a little loose crinkly paper filler and wrapping a gladiolas bulb in a coffee filter and tying it closed with a ribbon.   (I looked on the bulb bag to see how to spell gladiolis... it had an i.... now spell checker is saying it's an a at the end....Bee's teacher probably thinks I'm a moron. ) 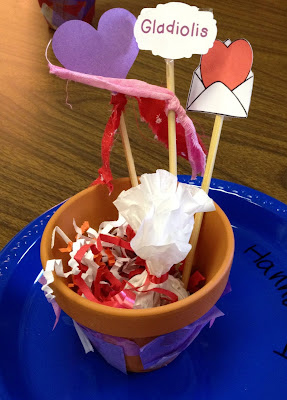 The last station had shortened shish kabob sticks. scraps of fabric, and precut paper toppers.  The kids assembled sticks to decorate their plant.   I printed and cut all the pieces with my silhouette.  It was fun to finally figure out the 'print to cut' option.

Last year, with roughly the same group of kids, we did watercolor art at the Valentines party and the year before, we played some of these games.
Think this is the last of the valentines posts in April... nope.
Posted by Beth- the mama bee at 8:54 PM