Using this tutorial, I have been making some (EASIER) zipper pouches. They aren't lined, but I like them just as much. I have a new one that I take to the gym that is just the right size for my ipod, phone, chapstick, hair band and gym pass. It can hang on the machine while I work out and I still have all my things right there instead of in a locker. We recently joined a gym and I am so happy that we did. I am so enjoying 5am by myself! I have fully recovered from an extremely embarrassing first attempt at their cycling class. (we still have peanuts left!) 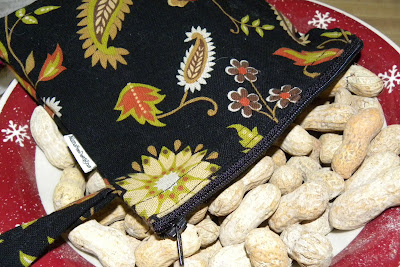 I mailed my brown paper package (part of the brown paper package exchange from Max and Ellie). I sent it to Valarie who blogs here. She has not blogged about the package yet, although I am sure she must have received it by now. I included a set of produce bags, a jar of apple butter, an ornament, and a felted wool bag. It was all wrapped up in brown paper. I tied it in string, but the postal worker had me remove most of it. 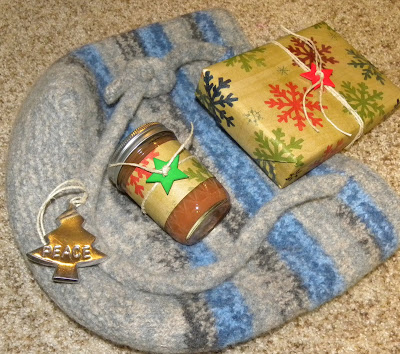 I saw online somewhere, where someone was sewing cloth gift bags for christmas. I have whipped up several and wrapped up our gifts in them. They are lined with fleece. Opening presents will be a quick event since opening a velcro is much faster than unwrapping presents. Here's the first one, I think they've gotten cuter the more I've made. 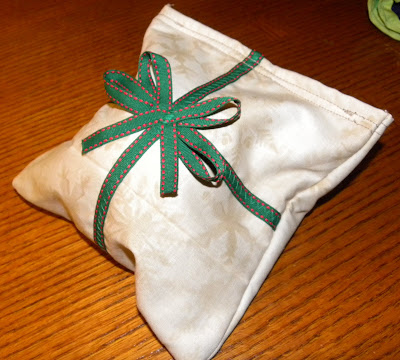 Even though we don't tell the kids that Santa comes to our house, we still like to go visit him and pose for a picture. We tell them he's just a symbol of Christmas, like a tree or lights. It's not a big deal, but people get kind of weird when we say that we don't "do" Santa. Our library had an evening story time with Santa and this guy was great! He was so good with the kids and sang songs and said that he would stay as long as it took for pictures and talking. He didn't want anyone to feel rushed. Lou finally was brave enough to sit with him. We sat and watched the other kids and went last. I think that helped Lou feel ok. When he asked Bee what she wanted, she said, "I think my mom and dad already got me presents." They decided that maybe she wants a pony. Thanks old man. 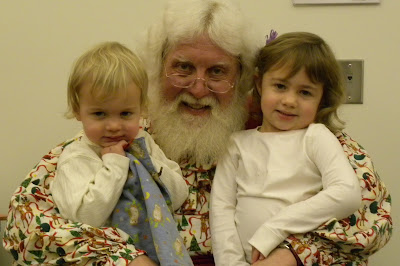 As of this morning, the last of the Christmas orders are shipped! hooray! I still have some projects to finish for our family, but there's time for that. I made tons of aprons this year. 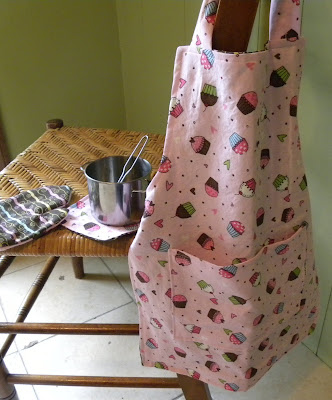 Just one cape! yippee... It went well despite my new dislike for sewing with the satin. 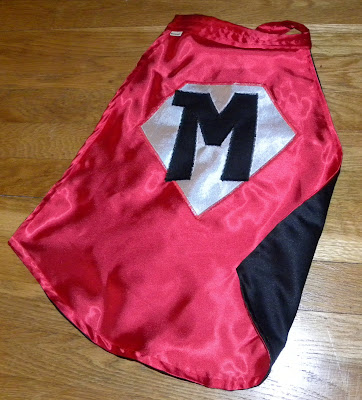 Here's a cute custom puppet curtain. I love the way it turned out. I did a cute one with flowers added on the bottom, but can't for the life of me find the picture. 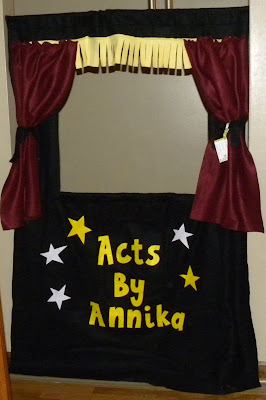 I also had this custom order for adult canvas aprons to kind of match the kids capes I made previously. The multiple layers of canvas were almost too much for my machine. I should have charged more for all the needles I broke! 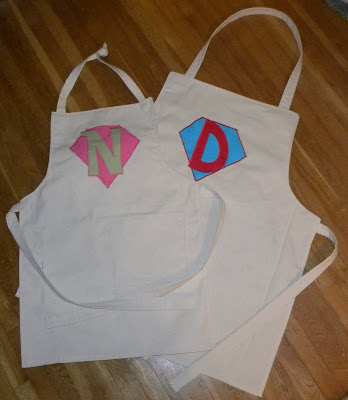 Hope your getting to all of your holiday odds and ends too. Tomorrow: Bee had her school Christmas program and it was super cute...
Posted by Beth- the mama bee at 6:41 AM

My godmother used to make cloth Christmas gift bags, and used them for years to wrap presents. They were great for odd-shaped presents (which many toys are) and we would actually use them throughout the year bc they were so sturdy. I keep wanting to do that, bc it would be greener, but I'm not a very good sewer.

I've seen your back yard and I think that you have enough roon for a pony. Think of all the neighbor kids that would come over for the day if you had a pony.

When do you sleep? More pouches (with zippers), Christmas bags (very green!), and another felted bag! Oh, my!

Beth,
I LOVE the little zipper pouches and what a great idea to take that to the gym! I wish I would have thought of that myself. Trying to carry the gym card, my phone, the Ipod, and my keys is a pain!!!haha