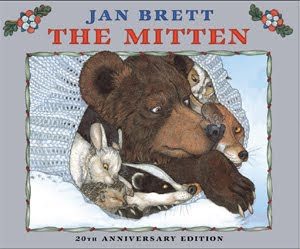 She came on her book tour stop to a book store in our area. We arrived about 40 minutes early, just because Lou fell asleep in the car and we didn't want to do our other planned errand. It was lucky that we did because the table passing out tickets was already set up. Each person could receive one ticket, and each ticket was one signing of a book. We brought our own books with us. We were surprised when we found we already owned 5 of her books. When we arrived, the folding chairs that were set out were all full so we had a seat on the floor near the front. After about 20 minutes of waiting, I realized that others were forming a line all around the different sections of the store. I asked the organizer what the directions were and she said that the line was for the book signing and the seats were for Jan Brett's speech, but that the seat people got to get their books signed first. I said that we did want to hear her speak, but thought we should go get in line then, since the kids wanted her to sign their books and I knew the line was going to just get longer (and boy did it!). One of the fine people from her publishing/tour team over heard and 'found' me a seat in the chair section, in the second row too. How kind. 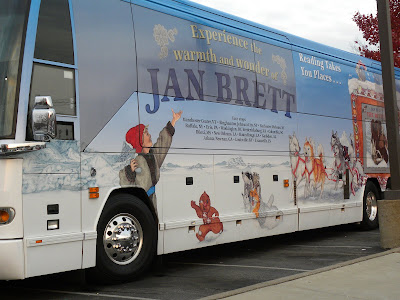 Here is her 'opening act', Hedgie, from her books. You can hardly see Bee in this picture. The lady sitting next to us took her up to see Hedgie since Lou was attacking my neck and shoulder saying, "NO, NO, I SCARED!" 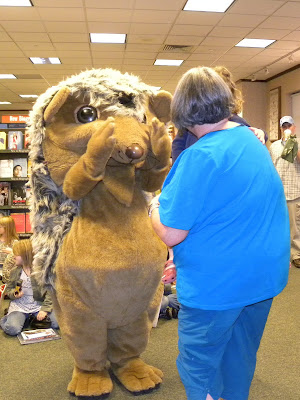 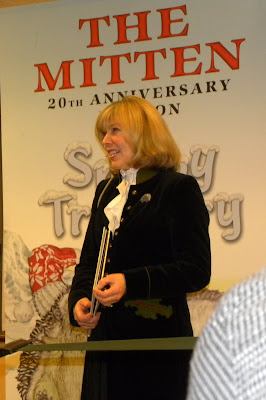 She told about her book, The Mitten. She did a little illustration lesson and demonstration. She said that she spends at least an hour per inch of artwork in her books! 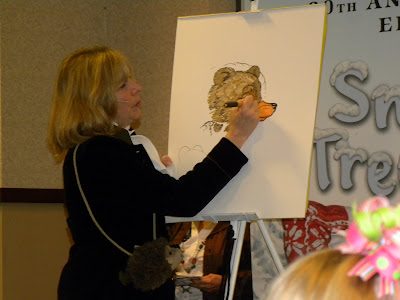 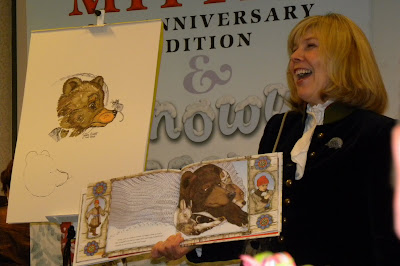 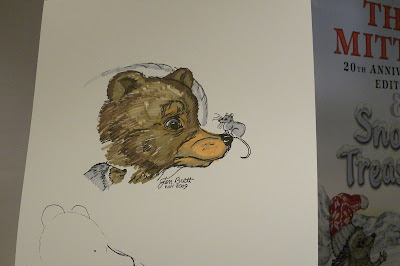 She talked about how she got the idea, where some of the characters came from and how she did her research. 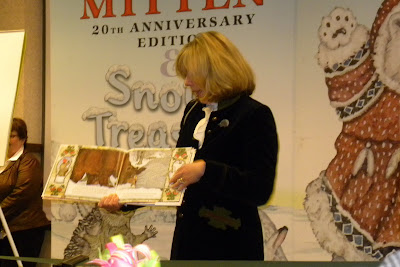 When we were almost up to meet her, I went to get everybody their book and ticket ready and one of the tickets was lost! We had 4 books to be signed and only 3 tickets. I search and search with no luck. It must have been dropped and picked up by someone else. I grabbed Bee's hand and walked over to the kind person who helped us earlier. I was hoping that having a sad child in tow would help our cause. She said she had one emergency ticket on her and we got it. What luck again.

Jan (because we are on a first name basis) was so sweet as she met with each person. She talked with the kids and let them help stamp little pictures in the books by where she signed her name and did a little personalization. She even had pre-signed stickers if you had more than one book, since she was only doing one book per ticket. 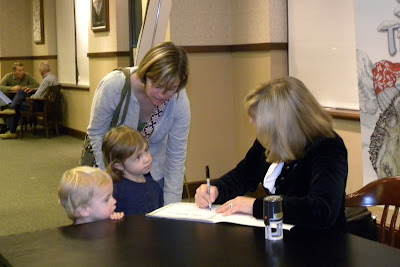 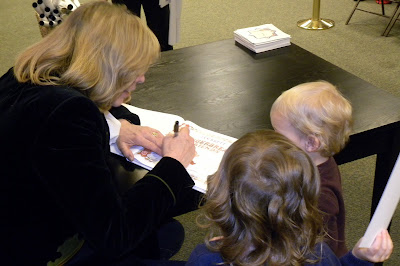 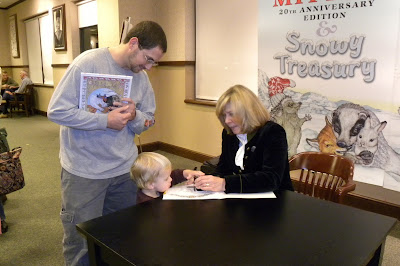 I think tonight was the most fun for me, but Bee did seem excited to have her book signed. Lou was pretty excited about a large poster all the kids received. It was rolled up like a weapon. Hubby was just happy to have his favorite people enjoying themselves, and was pretty pleased with the inscription he asked Jan for. But, that's a secret.

Email ThisBlogThis!Share to TwitterShare to FacebookShare to Pinterest
Labels: things you do for your kids

I'm sure this will encourage Bee's drawing. My kids missed out on those fun things because I wouldn't get in crowds.

wow! O love your story. How lucky to get to see her!
I'm sure when the kids get older, they will appreciate the fact that they have the signed books.

You met Jan Brett? What a treat! I've read her books to my classes for years. I can't believe this is the 20th anniversary of The Mitten.