When I saw this recipe for cauliflower fritters from Recipe Journal, I suspected they might be pretty tasty. I knew that they were going to need another name at our house though if anyone was going to eat them. I threw in a little bit of Parmesan cheese and renamed them parmesan cakes. Yummy. Even the kids gobbled them up. They tasted oddly like potato pancakes. Bee added ketchup and Lou liked them plain.


(I added 1/4 c Parmesan cheese)
extra virgin olive oil
steam cauliflower until tender, 10-15 minutes. transfer to large bowl and mash. let cool for 10 minutes. stir in flour and egg and season with salt and pepper. refrigerate for 15 minutes.
heat two tablespoons extra virgin olive oil over medium high heat. roll 1/4 cup portions of cauliflower mixture into balls, then flatten into patties. working in batches, fry the patties until golden brown, about 4 minutes on each side. 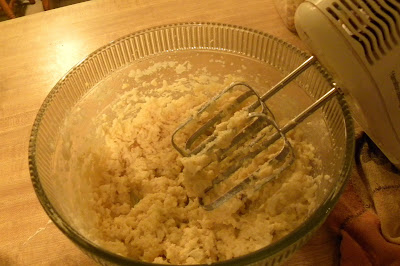 The cheese helped them get a little extra toasty. Toasty cheese, yum. 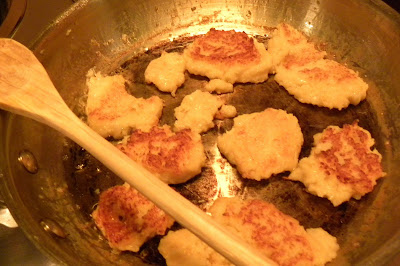 Email ThisBlogThis!Share to TwitterShare to FacebookShare to Pinterest
Labels: cooking

They sound so good. I may try that with left over cauliflower some time.

It's amazing what we'll eat when we don't know what's in it. I have to watch Jill. She tries to sneak vegetables into things, but I can tell....at least I think I can.

looking forward to seeing you next week.

I am one of the few people who absolutely loves cauliflower. Anyway you serve I will gladly eat it up. So thanks for the recipe!

Hmmm...this sounds good. I always like to find new ways to sneak veggies to my kids. :)