I am so NOT a fan of birds. However, I taught the theme of birds Tuesday at preschool and really did have a lot of fun.


I had a B for birds coloring sheet for the early arrivals (my kids). Then did a more creative B is for Birds sheet where we turned Bs into birds. I had several styles of cut out beaks and feet and let the kids glue those on. They added feathers and buttons as they thought fit. We ended up with some adorable birds. 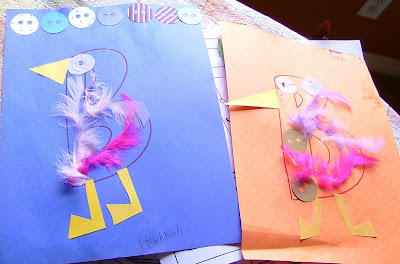 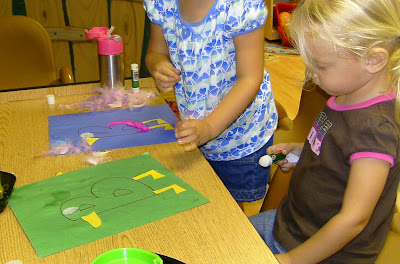 My favorite project came from No time for flashcards. I planned for us to go on a nature walk, collect our sticks and them headed inside to create our bird colleges, however it was raining. Luckily, I was prepared with a set of sticks already glued on paper in case it rained. We have mostly non-cutters, so I had the birds already cut out as well. I am a firm believer in letting kids do the project by themselves, but this did require some of my help/preparation. My daughter was the only one who seemed to notice that I did more of the project than normal. A few nights ago when I made up the sticks glued to the paper she said, "mommy, why don't you let the kids glue those, it's our project." 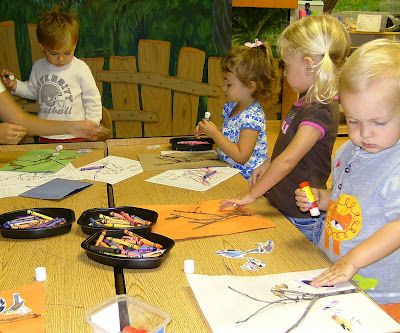 We sang a few little bird related finger plays and bird counting rhymes. The girls always want to sing these little rhymes over and over, the boys just watch and then go play. Of course, we dance around like birds and made bird noises.


The kids pretended to be birds and made nests with their legs. I handed each a card with a small number. They helped me count out plastic Easter eggs to match the number on their card. Lou got very upset because I was passing out his special 'ball' design Easter eggs.


I made chocolate and chow mein noodles birds nests for a little treat. For a real snack, I served 'bird seed' which was really just a trail mix of random dry snacks we had on hand. During snack I read Make Way for Ducklings. I have found that snack is the ONLY time I can read the kids a little bit longer book.


To practice counting our number of the day 20, we strung old spools on lacing. Bee and Lou like to make long string of my old sewing spools and then pull them around the house pretending that there are pets on the other end. Today, one of the girls suggested that they were jump ropes.... a few whacks in the head later and decided to move on to a new project. 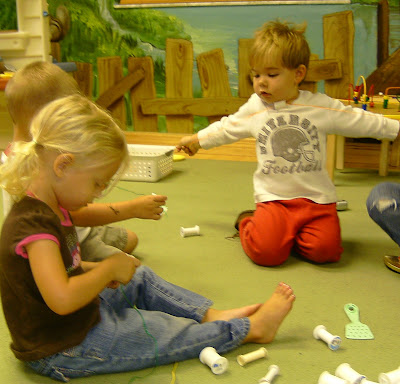 I had intended to eggs out of cornstarch clay using a recipe from sweet things but when Bee, Lou and I were testing it out, I decided just to have the kids play with play-doh. We didn't even end up with time for this, so I'm glad I didn't make anything special for it.

One of the books we read was Feathers For Lunch. I love the college style birds pictures in this book. I made cards with the birds from the book and had the kids look for their bird in the book. We worked on matching the card with the pictures in the book. 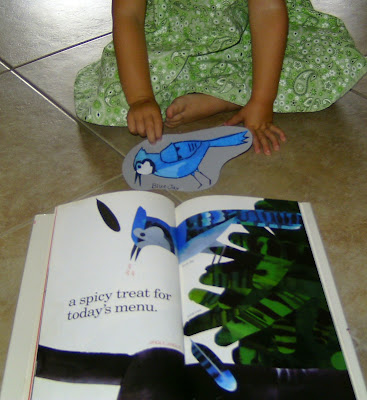 I found a little printable book about a mama bird building a nest. We used it to work on story sequencing. I made sure there were enough for everyone. I read through it while they followed along in their own book. Then they looked through them several times on their own. Some colored the pages. 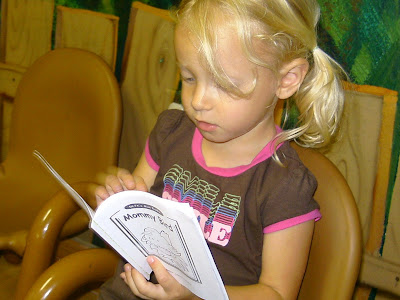